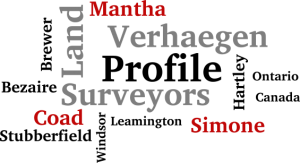 Verhaegen·Stubberfield·Hartley·Brewer·Bezaire Inc. was created in May, 1987 by the amalgamation of the firms of Verhaegen & Bezaire Ltd. and Stubberfield, Hartley, Brewer Ltd.

Verhaegen & Bezaire Ltd. was a successor to a surveying business established in Windsor in February 1969 by Hans J. Koester, O.L.S. and John Verhaegen, O.L.S. Stubberfield, Hartley, Brewer Ltd. was established by William C. Stubberfield and Timothy D. Hartley in 1983 who along with William A. Brewer purchased the Land Surveying business of William J. Setterington in November 1985.

Verhaegen·Stubberfield·Hartley·Brewer·Bezaire Inc.
(Also referred to as VSHBB Inc.) has approximately 30 people on staff. To stay abreast with current technology VSHBB Inc. is constantly upgrading its facility with some of the most modern surveying and computer equipment available today.